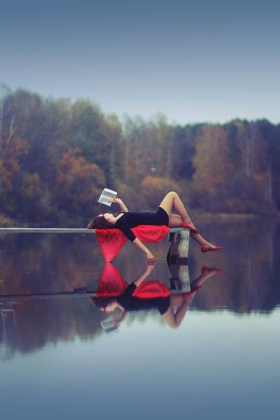 Larry woke up, cold and shivering. It was the same dream again. The girl lay by the lake, reading, ‘The Mystery of Edwin Drood’ by Charles Dickens. Below the title, it read, ‘The finished draft’. How did she get hold of the completed version? This was Charles Dickens’s last incomplete work.  Larry just stood in the shore, looking at her. He could not swim.  The girl took her eyes from the book and her eyes widened in fear as she looked at him. She dived into the lake with the book. Larry noticed that her red shoes were in fact a tail as she disappeared into the water.

Larry was sure that there was a finished version. He was a fanatical bookworm and had read all of Charles Dickens’s work. He asked all the libraries in the city. He even put up advertisements. He is still searching for the ‘final’ draft.

This was written for Ermilia’s Picture it & Write.